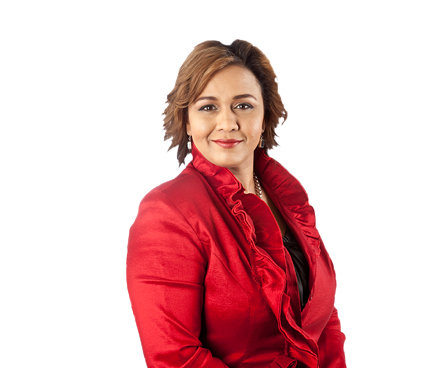 I must admit that I know nothing about journalism, and I know not how to determine whether a journalist is good at what they do or if they conduct their work professionally. But, there are a few journalist I enjoy listening to and reading their work, because they seem convincing to me that they are good at what they do. One of them is Iman Rappetti of eNCA (at the writing of this article Iman had resigned from eNCA) and PowerFm. In my opinion, she is professional, and deserves respect as a journalist.

I am not writing about her work in this piece. As the title indicates, I am responding to this article which she wrote for The Huffington Post on the 11th of April 2017. In it, she writes about her journey about unlearning to call God for help. She says it was scary at first, but it seems as though it is no longer scary. Here is the reason, in Iman’s words, why it no longer is: “For now, I have learned to appreciate that what I do is up to me, that I will do good because I can, and that the punishment for my sins, will come as a consequence of my actions right here on earth. There is no eternal bliss or eternal suffering to hope for or be afraid of. It’s a frightening and weighty thing, to take full responsibility for my actions, to know that there can be no supernatural absolution. I wear my right and wrong in the here and now”.

It seems to me, based on this, that Iman suffers from two things. I will list them below as an appeal to Iman to call God for help while He may still be found, as Isaiah 55:6,7 states, “Seek the Lord while He may be found; Call upon Him while He is near. Let the wicked forsake his way and the unrighteous man his thoughts; and let him return to the Lord, and he will have compassion on him, and to our God, for He will abundantly pardon”.

Firstly, Iman suffers from unbelief. The Christian religion, Iman, is a religion of faith. If anyone wants to be a Christian, they must believe in the Lord Jesus Christ, and be saved. They must come to God in confession, and ask Him to help them to turn from their sinful living and thoughts. If a sinner comes to the Lord like this, then the Lord promises to forgive them their sins, and receive complete pardon. This is the only way the Bible encourages you to take full responsibility for your actions; by believing in God who has provided a substitute in your place to take the punishment you deserved for your actions.

Secondly, Iman suffers from ignorance. She believes that there is no eternal bliss or eternal suffering to hope for or be afraid of. I may be wrong in saying this, but I think what brought her to this position is that she has come to believe that we live in a universe where there is no God. Therefore, if there is no God, there is neither heaven nor hell. This makes sense to her and she is happy with it. This simplistic secularist position is nothing new. It is, in fact, an old religion.

Has she read the Bible on heaven? We will be with the Lord there, and with the believers of all time, worshipping Him who sits on the throne. There are many fascinating things in heaven. There will be a great and high wall, with twelve gates, and at the gates twelve angels. This wall of the city has twelve foundations of stones. The river of the water of life will be there, clear as crystal. “In the middle of its street on either side of the river was the tree of life, bearing twelve kinds of fruit, yielding its fruit every month, and the leaves of the tree were for the healing of the nations”. When you picture this, don’t think about anything in nature to compare this with, because we cannot with our human brains visualise comprehensively this reality. It will be something unlike we have seen in this side of life.

According to what I have read from Iman’s article, it looks like she is practically living her life as holy and good as she can. But the Bible warns that it is possible for people to live righteously and not end up in heaven. To these people, Jesus will say on judgment day, “depart from me, I never knew you”. If this should strike with holy fear those who are righteous and are trusting in their good works to take them to heaven, how much more should this strike with holy fear those who are living righteously but not to please God? At His coming, the Lord God will raise bodies of the dead, and clothe them with immortality, or clothe in immortality the bodies of those who will be alive at His coming. At this appointed day, because of their deeds, the wicked shall go into everlasting punishment, and the righteous, by faith, into everlasting life.

So, you can live your life in doubt, and convince yourself that there is no supernatural absolution.  But we say there is, and it is Jesus Christ’s work on the cross when He died a death He did not deserve so that all who believe in Him will be pardoned and spend eternity with Him in the new heavens and the new earth. If this is false, Iman, then the Christians will be of all people most to be pitied. But if it is true, then you will have no excuse before a Holy God on the day of judgment.

I appeal to you, then, in conclusion to consider these three things put forward by Dr. Tim Keller in “Making Sense of God: An Invitation to the Skeptical”. 1. To doubt Christianity requires a lot of faith. 2. The problems we have without it are immense. 3. The beauty we see within it is unmatched. To live without Christ, Iman, is scary, and it is a weighty and frightening thing to want to carry your own sins when someone has already did. Would you please repent, and apply the words of the song you quoted: one day, this faith will be sight. The trump shall resound, and the Lord shall descend. Where will you hide? What will your defence be?